A Tale of Roscoe: The “Perfect” Dog! 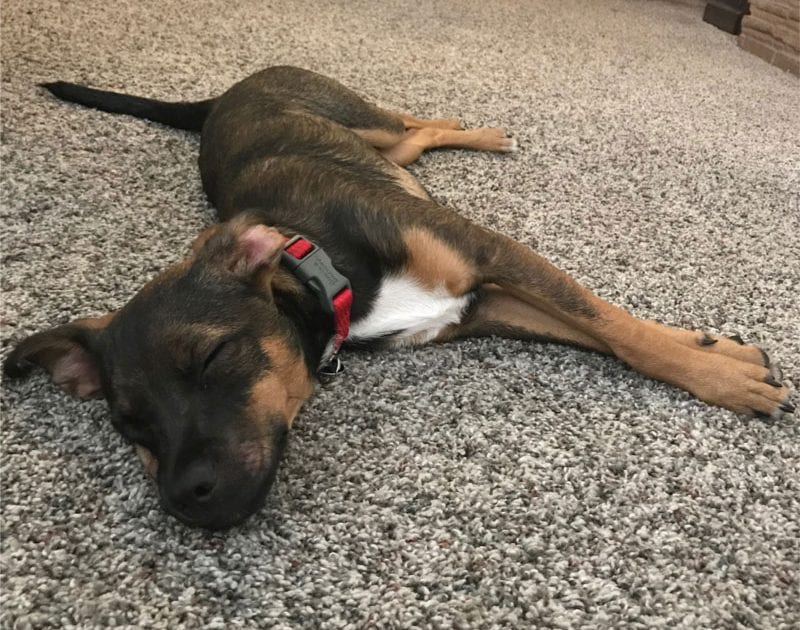 For months, Redtail employee David Sipe and his girlfriend Angela had been playing around with the idea of bringing another member into their family while their kids are still young. They knew what kind of dog they wanted: at least a year old, female, medium-sized, energetic but not overwhelmingly so . . . the desired traits list went on from there.

On their visit to Front Street Animal Shelter, they gave their requirements list to the Foster Coordinator. After a walk through the aisles of noisy kennels, David and Angela came upon Roscoe (whose name at the time was Prince). He was the antithesis of their imagined “perfect dog” – he wasn’t any of their desired breeds, he (you’ve probably gathered from our choice of pronouns) was a boy, and he seemed a bit wilder than what they thought they were prepared for.

Still, they brought him out to the play area and watched as he chased tennis balls and leaves and barked at invisible “intruders”. After some playful interaction with this pup, they knew they couldn’t put him back in the kennel and decided to take him home to see if he might adjust to their environment. He was a complete surprise to their kids as they arrived home from school!

It has now been a few months and Roscoe is everything their life needed and so much more. He is such a fun bundle of energy and has so much love for his family – almost as much as they do for him. Out of all the silly things he does, the entire family agrees that their favorite is how he interacts with the family cat, who’s been around for eight years and isn’t about to let a goofy puppy take over as “King of the House”. The creatively named “Kitty” will allow Roscoe to get just close enough to her so she can smack him. But Roscoe is smart and has learned to sneak up to her, inch by trepidatious inch, face averted, peripherally checking her out and attacking when he deems her sufficiently distracted. All he wants is to play with her, to cuddle her, or even to help her bathe herself.

Roscoe has made their family complete – until Angela is able to convince David to get another “perfect” dog!